Heartwood is an independent bottler of Tasmanian whisky, with over 10,000 litres of the good stuff attempting to hit its straps in the unforgiving Australian climate, some of which is possibly the oldest Australian single malt whisky going around.

Heartwood is a project of possibly the number 2 guy in Australian whisky (behind his good mate, Bill Lark), Tim Duckett, who is extremely passionate about his product.

From the website: “We are there to determine the amount of peat used for production. We are there when the spirit is produced. We are there to select the barrel. We are definitely there to sample the whisky as it matures. We do not have commercial drivers. The quality of the whisky produced is the most important aspect of our endeavours. The whisky will be bottled when it is ready. If it is really, really, good, we might just keep it for ourselves (to be shared with friends).”

The distillate, produced at Lark distillery and influenced by Tasmanian peat, has been measured to a Sphagnum peat influence of 50%. Initially matured for 3 years in 2 separate 100 litre port casks, before being married for 4 years in a 200 litre Australian Sherry cask and bottled at a cool 65.4% ABV, there’s something mildly scary about sitting down to a glass of this.

It’s darker than any whisky I’ve ever tried, holding the bottle up to the light very little shines through the spirit, giving off a dim brown-maroon hue. This is for drinking right? Should I be wearing a hazmat suit?

To smell; to start – my high school woodwork class; wood shavings, sawdust, varnish, a sweet note intermingling. Then… Hold on a second… Holy crap, here come the port notes! Thick and juicy red fruit notes uppercut my nostrils! Motherflipper it’s big! The port sweetness just blew my nose off!!! The carpentry aromas take a back seat while the violence ensues.

After pulling myself back together, the nose eventually settles down, becoming more delicate and approachable. With the aid of a teaspoon of water I get – Red Vines, fruitcake, honeycomb, a touch of struck matches appears for a second (contributing to rather than hindering the experience), and Goanna Oil (medicinal oil for rubbing on sore muscles).

To taste; surprisingly soft, all recent events considered. Don’t get me wrong, this will still make the eyes water on first sip, but it’s very enjoyable and sweet. Sherry takes the lead then Port dries and rounds out. My nose knows better than my tongue so the best I can do is Cherry Ripe (on steroids of course).

Addition of water – becomes creamy, absolutely amazing mouth feel to this. The finish is a battle between the immense sweetness, and the obviously active cask, becoming slightly bitter, but excusably so.

It may be that the alcohol content has hit me for 6 (Australian whisky, had to throw in a colloquialism), but the bitterness reminds me of vegemite until the sweetness kicks in.

Truly unique, and mightily impressive, it’s not perfect, but it’s something to be bloody proud of Tim. 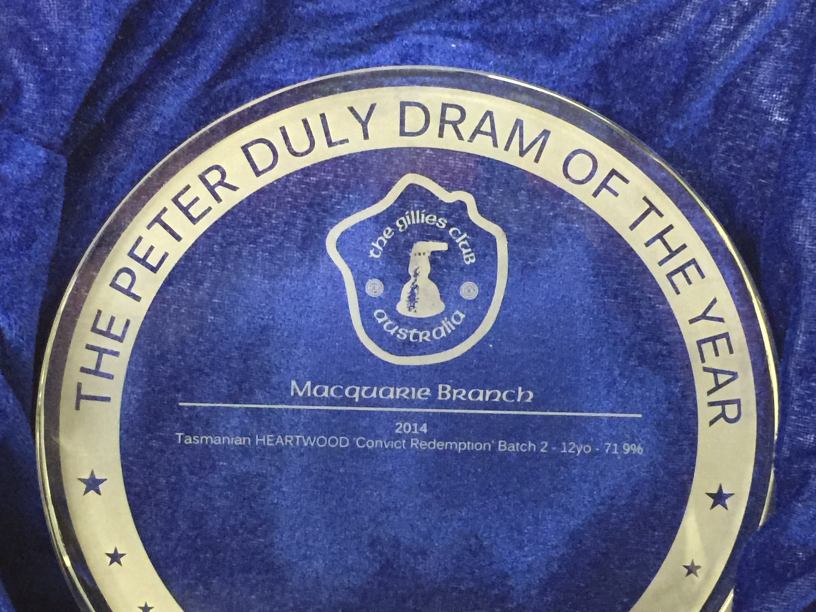